As millions of bicycle tires are disposed of every year around the world, some companies are becoming more conscious about how sustainable they are. BikeBiz magazine reports that Gecko – a British manufacturer of bicycle tires – has patented a new lightweight expanded, cellular rubber technology, where old tires can be returned, recycled and used in the manufacture of new bicycle tires – with potentially up to 30% of the new tire composed of recycled material.

In fact, an independent life cycle assessment analysis of the Gecko tire showed that it would be at least 70% less damaging to the environment compared to an equivalent pneumatic bicycle tire. “I set up my own company about 16 years ago to develop an expanded, cellular rubber technology, with the aim of using it in tires,” says Gecko’s Richard Adams. “You’d often find bicycles in sheds and garages with flat or cracked tires not being used. We thought the answer to that would be a solid tire. 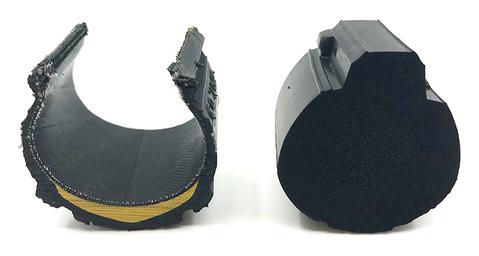 A well-known puncture resistant pneumatic tire on the left (with its various textile layers, metal inserts and various separate rubber compounds & the puncture proof Gecko t-re (with it's single rubber component) on the right. | Photo by Gecko Rubber Bicycle Tires.

“For many years, solid tires have been available but they haven’t had a very good reputation. We’ve come up with something quite new and radical that makes a big difference – but really up until then they were difficult to install, they don’t give much grip and much comfort. They’re not sustainable – certainly not recyclable back into a tire. We thought there were limitations – so we developed Gecko bicycle tires.”

Gecko tires are made using a single compound that can be recycled, Adams continues. “If you look at a normal bicycle tire, as with car and other tires, they’re made up with a number of different compounds and they’re virtually impossible to recycle. 95% of all bicycle tires go to landfill, and so do many of the inner tubes.”

Another important element of the Gecko tire is its performance. While the sustainability aspect of it is appealing to many, it’s still got to work – and be better than what’s already out there. “Our technology grips very well, we’ve got good comfort and we’ve developed our own clipping system that’s easy to install,” Adams continues. “It takes less time taking the tires off than it does putting them on.”

Gecko’s own unique tire retaining clip system uses toughened polyamide clips, which are also 100% recyclable, located at the tire inner rim profile that lock into each other when the tire is fitted to the wheel rim. Once the clips are located correctly into the wheel rim bead recess, the natural elastomeric rubber qualities of the Gecko tire ensure the clips are retained within the wheel rim for the service life of the tire.

“We’ve hit the problem areas that solid tires systems had, so we hope that once people get familiar with Gecko tires, there won’t be as many bikes left in garages with flat and cracked tires not going anywhere. People will be encouraged to use them.” Solid tires also last far longer than pneumatic tires, Adams says. On average, the bike share schemes that have used its tires say that they last at least twice as long as the puncture-resistant pneumatic tires. And that will be very similar for people who use the tires on their own bikes.

To read more about Gecko’s innovative bicycle tires, proceed to the article by BikeBiz magazine. 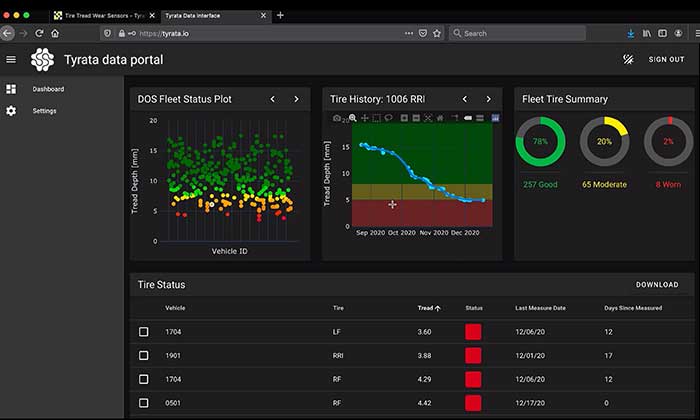 Kal Tire – international OTR and mining tire manufacturer was recently nominated for the Recircle Awards in the category “Best Retreading Industry Innovation” for its Carbon Calculator / Maple Program launched in 2020. Kal Tire’s Carbon Calculator quantifies environmental savings when retreading OTR and mining tires that reached their end-of-life stage. The Maple Program uses data from Kal Tire’s new carbon calculator to award customers with one to five stars according to the percentage of their fleet running retreads rather than new tires. The program is first launching in Chile and the UK, with plans to roll out in other regions Kal Tire operates.

According to the officials, the move is expected to bring down the cost of imports of carbon black for tire makers, small and medium-sized rubber goods manufacturers, while reducing the protection levels for domestic makers of carbon black such as Philips Carbon, Birla Carbon and Himadri Speciality, The Hindu Business Line reports. Yet, it remains unclear if consumers will benefit as much as they would depend on the rubber good producers passing it on to the customers, they added.