BASF SE – one of the largest producers and marketers of chemicals and related products in the world – is to invest €16 million into a German pyrolysis operator Pyrum Innovations AG – a technology company specialized in the pyrolysis of end-of-life tires, headquartered in Dillingen/Saar, Germany – as part of its ChemCycling™ project, which aims at sourcing pyrolysis oil from end-of-life tires as additional raw material source next to oil from mixed plastic waste.

BASF says the investment will support construction of additional production capacities for pyrolysis oil. In addition, it will become a milestone in establishing a circular economy for post-consumer plastic waste. In the project, pyrolysis oil will partly replace fossil feedstock and be used for demanding plastic applications. With the investment, BASF will support the expansion of Pyrum’s pyrolysis plant in Dillingen and the further roll out of the technology.

Pyrum is currently running a pyrolysis plant for end-of-life tires that can process up to 10,000 tons of tires per year. Until the end of 2022, two additional production lines will be added to the existing plant. BASF will uptake most of the pyrolysis oil and process it into new chemical products by using a mass balance approach as part of its ChemCycling™ project. The resulting products will mainly be for customers from the plastics industry who are looking for high-quality and functional plastics based on recycled materials. 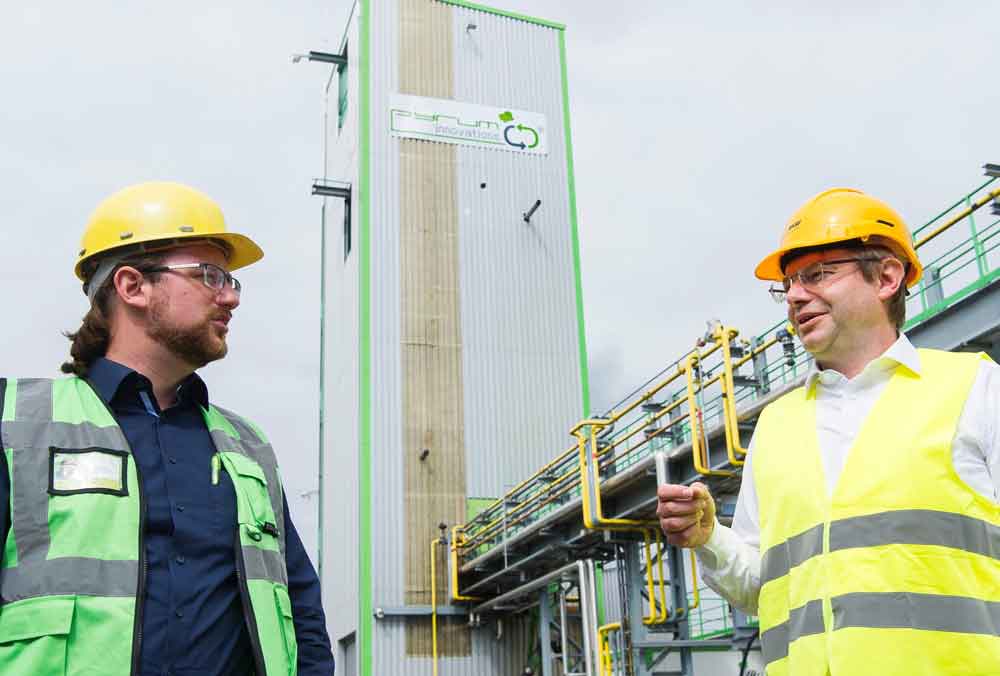 Furthermore, Pyrum intends to build additional tire pyrolysis plants together with interested partners. The collaborative set-up will accelerate the path towards the use of Pyrum’s unique technology in serial production. Future investors in the technology can have the certainty that the pyrolysis oil produced will be taken up by BASF to produce high-performance chemical products. The co-operation will thus serve to close the loop for post-consumer plastic waste. Waste tires fall within the definition of post- consumer plastic waste according to DIN EN ISO 14021:2016-07.

BASF and Pyrum anticipate that production capacities of up to 100,000 tons of pyrolysis oil derived from waste tires could be built up within the next years together with additional partners. “BASF is committed to leading the transition of the plastics industry to a circular economy. Replacing fossil feedstock through recycled feedstock at the beginning of the chemical value chain is a major lever in this regard,” says Hartwig Michels, President of BASF’s Petrochemicals division. “With the investment, we have taken another significant step towards establishing a broad supply base for pyrolysis oil and towards offering our customers products based on chemically recycled plastic waste on a commercial scale.”

“After twelve years of hard work Pyrum is proud to finally be accepted by the market. We are confident that we will become one of the market leaders in tire recycling with BASF’s investment,” says Pascal Klein, Founder and CEO of Pyrum. “We can finally increase our tire recycling and oil production capacity and concentrate our efforts on making our technology even more performant.”

BASF will use the pyrolysis oil from end-of-life tires as an additional raw material source next to oil from mixed plastic waste, the use of which is the long-term focus of the ChemCycling project.

Products made from pyrolysis oil by using a mass-balance approach have the exact same properties as products manufactured with primary fossil resources. In addition, they have a lower carbon footprint than conventional products. This is the conclusion of a Life Cycle Assessment (LCA) analysis, carried out by the consulting company Sphera on behalf of BASF. Among others, the LCA analysis could show this for the production of polyamide 6 (PA6), a plastics polymer which is, for example, used in the production of high-performance components for the automotive industry. One ton of PA6 produced with tire pyrolysis oil from Pyrum under a mass balance approach emits 1.3 tons less CO2 compared with one ton PA6 produced with fossil feedstock. The lower emissions result from avoiding the incineration of the end-of-life tires. More information on all LCA analyses for ChemCycling can be found here: https://basf.com/chemcycling.

At BASF, we create chemistry for a sustainable future. We combine economic success with environmental protection and social responsibility. More than 117,000 employees in the BASF Group work on contributing to the success of our customers in nearly all sectors and almost every country in the world. Our portfolio is organized into six segments: Chemicals, Materials, Industrial Solutions, Surface Technologies, Nutrition & Care and Agricultural Solutions. BASF generated sales of €59 billion in 2019. BASF shares are traded on the stock exchange in Frankfurt (BAS) and as American Depositary Receipts (BASFY) in the U.S. Further information at www.basf.com.

Pyrum Innovations AG is creating the recycling of tomorrow by trying out methods and systems that have never been tried before. Our goal has always been to go the extra mile and to try things that others consider “impossible”. In the last years, the Pyrum family has grown from 20 to almost 50 enthusiastic, extraordinary and mostly fearless employees who are encouraged to question everything in order to get the best results. Today Pyrum operates one of the most modern tire pyrolysis plants in Europe which recycles 2,500 to 3,000 tires per day in Dillingen, Germany. Many more plants are to come soon. Further information at www.pyrum.net.