Pyrolysis of waste rubber and End-of-Life tires is a chemical recycling operation by which waste materials are reprocessed into chemical products (rCB and TDO) to become input feedstock for chemical plants and other industries. Therefore, chemical recyclers are both waste managers and manufacturers of new substances in the sense of the circular economy.

Chemical recycling operations can help avoiding or reducing greenhouse gas emissions and reduces the use of primary raw materials while increasing the use of sustainable secondary raw materials (SRM). They are supporting the overarching and concrete specified goals of the EU Green Deal and the UN Sustainable Development Goals, while contributing to the GHG reductions in the manufacture of tires, technical rubber good and plastic masterbatches (etc.).

The current series of articles would like to take up a topic that is currently much discussed among players in the chemical recycling industry and contribute to a better understanding of the instruments, functions and possibilities of GHG emissions pricing (and their trading instruments). 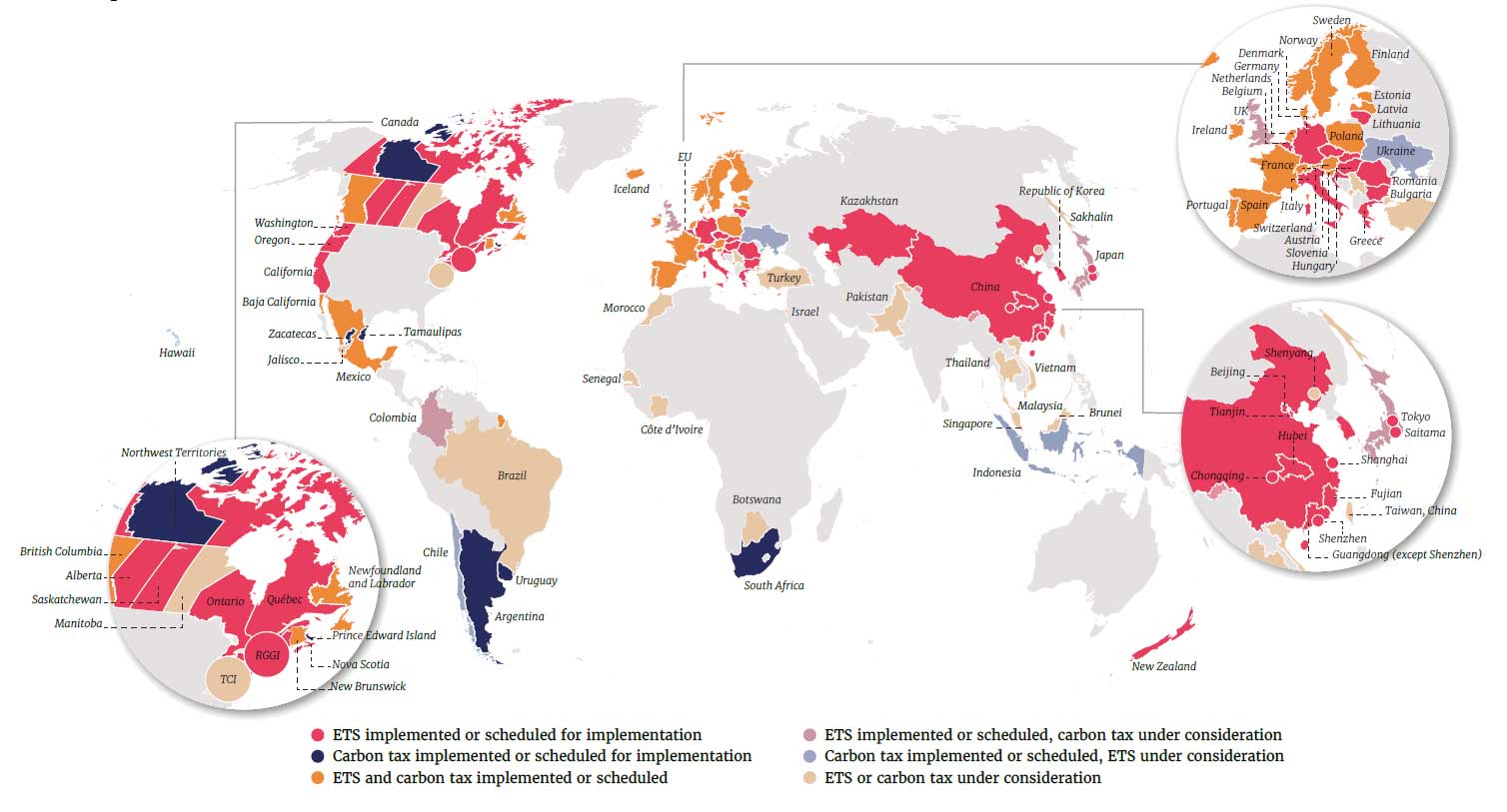 What is carbon pricing

Carbon pricing is a policy tool that governments can use as part of their broader climate strategy. A price is placed on greenhouse gas emissions, which creates a financial incentive to reduce those emissions or enhance removals. By incorporating climate change costs into economic decision-making, carbon pricing can help encourage changes in production, consumption, and investment patterns, thereby underpinning low-carbon growth.

Carbon pricing instruments (CPIs) generally aim to remove price barriers to low-carbon development. But these are often not the only types of obstacles that should be addressed for effective climate policy. As such, CPIs typically need to be complemented and enhanced by other types of policies that address a broader range of climate change challenges and market failures. This can include research and development, sector-specific regulations, investment in technology and infrastructure, the removal of regulatory barriers, and market reforms to enable incentive-based approaches. Additional measures may also be needed to mitigate undesirable impacts of climate policies on specific sectors or groups in society.

The climate impact of carbon pricing depends on how broadly the price is applied, the price level, and the availability of abatement opportunities. Economy-wide carbon pricing policies are more effective than carbon prices restricted to certain sectors or goods and higher carbon prices incentivize greater emission reductions. Creating a credible and more predictable price signal over the longer term will support long-term investments and incentivize low-carbon development. 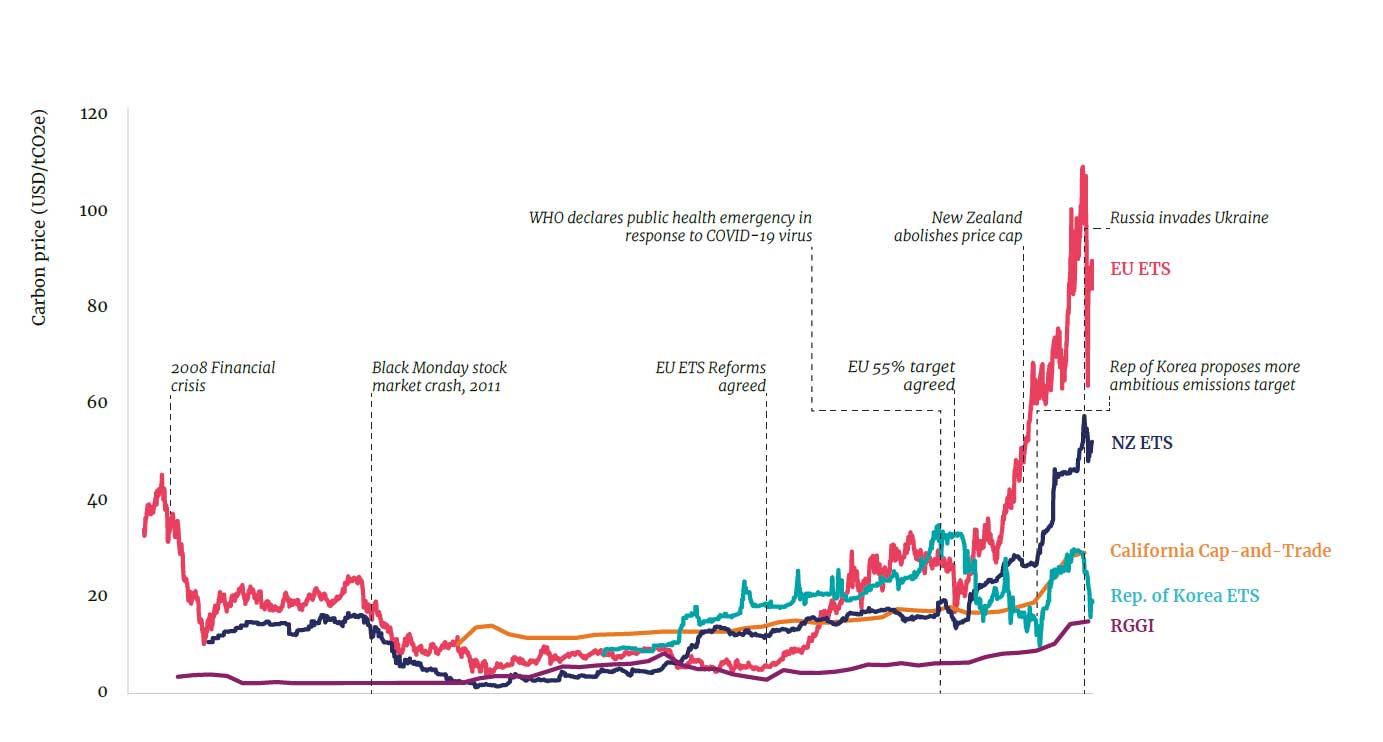 Carbon prices have hit record highs in many jurisdictions. Nonetheless, prices must rise considerably more to meet the Paris Agreement temperature goals, as less than 4% of global emissions are currently covered by a direct carbon price within the range needed by 2030.

Global carbon pricing revenue increased by almost 60% in the past year, to around USD 84 billion surpassing carbon tax revenues for the first time. While carbon taxes have historically generated more revenues than ETSs, the gap has narrowed in recent years and in 2021 ETSs generated over two thirds of total revenue (USD 56 billion). This largely reflects the fact that ETS prices are rising faster than fixed-price instruments. A second factor is the increasing share of auctioned allowances rather than free allocation.

The adoption of direct pricing continues but the global coverage remains low.

As of April 2022, there are (only) 68 CPIs operating with three more scheduled for implementation. This includes 37 carbon taxes and 34 ETSs. A new carbon tax in Uruguay commenced in January 2022 and three new ETSs also commenced in the past year in subnational jurisdictions in North America—Oregon, New Brunswick, and Ontario. One US state, Washington, as well as Indonesia and Austria, have CPIs scheduled for implementation.

Approximately 23% of total global GHG emissions are currently covered by operating CPIs (an increase of only 1.5% on the previous period).

While there have only been four new CPIs implemented since 2020, more jurisdictions took steps toward implementing or expanding carbon pricing. In addition to the instruments scheduled for introduction (i.e., in Austria, Indonesia, and Washington State), Israel, Malaysia, and Botswana announced their intentions to develop new CPIs and Vietnam outlined steps to set up an ETS. Several other jurisdictions in Africa, Central Europe, and Asia continue to assess the potential to implement CPIs.

The largest carbon market by traded value, the EU ETS, saw record trading activity and prices in both spot and futures markets. Over 15 billion emission allowances were traded on the Intercontinental Exchange, the largest secondary market platform for EU allowances, with spot prices increasing almost threefold over the calendar year. The EU Climate Law entered into force in July 2021, which set the binding new EU-wide climate target to reduce GHG emissions by 55% in 2030 compared to 1990 levels and achieve net zero emissions by 2050. The package of measures that has been proposed to meet the new commitment (known as “Fit for 55”) includes the addition of a new, separate ETS covering transport and buildings. This would exist in parallel to the existing EU ETS, which covers the power, industry, and aviation sectors, though it would share some common elements, such as the market stability reserve (MSR). The proposed package of measures would also extend the scope of the existing EU ETS to include shipping emissions beginning in 2023 and covering 100% of emissions for voyages between member state ports and 50% for voyages between EU ports and third-country ports by 2026. The EU legislature is currently debating these proposals; the presidency for the Environment Council meeting in March 2022 indicated that the proposal to include shipping has broad support but the proposal to include transport and buildings has generated significant debate among member states and in the EU Parliament.

China hosts the world’s largest carbon market by emissions. The first full compliance cycle of the national ETS was completed in 2021, with a reported compliance rate of 99.5%. Over 2,100 liable power stations participated during this cycle, covering about 4.5 billion metric tons of CO2 equivalent per year. This accounts for over 30% of China’s total GHG emissions.

While the prices for emissions allowances remain relatively low compared to other pricing systems, the closing price for the year of USD 8.5 per metric ton of CO2 (tCO2) translated to an increase of around 13% over the six months since trading commenced. A total of 179 million tCO2e of allowances were traded in 2021, representing a cumulative turnover of close to USD 1.2 billion. While this represents relatively low volumes for a market the size of the Chinese ETS, it is not insignificant given the Chinese ETS is still taking key phase-in steps and compliance trading only commenced in earnest in October 2021 and currently only covered entities (i.e., not financial institutions) are allowed to make trades.

Carbon pricing can provide the impetus for economic transformation and recovery.

CPIs in operation cover approximately 23% of total global greenhouse gas (GHG) emissions. This represents only a small increase in total global coverage as a result of four new systems commencing in 2021.

Global carbon pricing revenue increased by almost 60% in the past year, to around USD 84 billion. With prices rising and reduced free allocation, ETS revenues surpassed carbon tax revenues for the first time.