For the sake of completeness, we would like to emphasize that these articles are no legal advice from Weibold or the author. For legally binding statements, please refer to the responsible authorities and / or specialist lawyers.

The International Organization for Standardization (2008, 2013) defines chemical recycling as a production of new raw materials by changing the chemical structure of polymers (e.g., plastic, rubber) through depolymerization, excluding energy recovery and incineration. Whereby depolymerisation is understood as a reversion of a polymer to its monomer(s) or to a polymer of lower relative molecular mass. This irreversible chemical decomposition (depolymerization) in pyrolysis processes is caused solely by a rise in temperature in an inert or oxygen free environment (UIPAC, 2021).

The chemical recycling of end-of-life tires (ELT) through pyrolysis is therefore a recycling operation by which waste materials (ELTs) are reprocessed into chemical products (recovered Carbon Black and tire-derived-oil (TDO)) to become input feedstock for chemical plants. The chemical recycling of end-of-life tires (ELT) via state-of-the-art pyrolysis technologies does not only avoid greenhouse gas emissions compared to today’s conventional production processes, but it also increases the resource efficiency while closing the loop in the transition to a circular economy.

However, civil organisations criticise the production of fuel through chemical recycling. Sometimes they mutilate the terminology, pointing to the associated environmental impacts, while they overlook the fact that modern ELT pyrolysis concepts are not geared towards the production of "fuels" (which, by the way, should not be defined as "recycling" but rather as less preferred "recovery" according to the EU waste hierarchy), but rather towards generation of new (secondary) raw materials.

Critics of chemical recycling also like to point out that energy must be supplied for the pyrolysis process (which is naturally also associated with some GHG emissions) and/or that the product output (e.g., recovered carbon black) must be processed further (milling, pelletizing) to be saleable to the industry.

At this point, we shall refrain from raising a finger by schoolmasterly pointing out that no industrial production process (of whatever type) is known that does not require energy input and multi-stage production steps. The question rather must be what the overall balance of the chemical recycling of ELTs is for the environment and resources (not forgetting the economics): It was already possible to show many years ago in a much-cited comprehensive life cycle assessment (Li et al., 2010) that pyrolysis of ELTs is the best recycling technology among all known mechanical and non-mechanical ELT recycling technologies. [1]

It should be noted that the academic literature published to date on ELT pyrolysis LCAs all refer to technologies that are absolutely outdated (e.g., batch cycle lasting 11 hours, etc.) and were using coal-generated electricity.

Modern pyrolysis technologies, on the other hand, are equipped with efficient exhaust gas and /or flue cleaning facilities, use an electricity mix from renewable energy sources, recycle excess energy for the process (reduced energy consumption), and have state-of-the-art control and safety systems (etc.). This leads to an even better overall environmental profile, in which the predominantly positive effect on human, environment, and resources is again greatly increased compared to the status-quo in 2010.

The most eco-effective ELT recycling technology

The aim of a “Chinese case study” by Xingfu Li and colleagues published in 2010 [ref. 1] was to compare different end-of-life tire (ELT) treatment technologies in China from an environmental and economic perspective. Three legal treatment technologies were evaluated: ambient grinding, devulcanization, and pyrolysis (additionally also the illegal tire oil extraction).

A Life cycle assessment (LCA) was applied to evaluate the potential environmental impact of each treatment based on the Eco-indicator 99 (Hierarchist approach) method provided by GaBi 4 software. The result shows that pyrolysis represents the environmentally benign option (while illegal tire oil extraction logically caused the worst damages).

Li further suggested avoiding impact as to respiratory effects (inorganic) dominantly contributed by the energy production stage (remark: coal remains the largest contributor to China's energy mix), that the emphasis should shift from the control of emissions (which nonetheless remains important) to the reduction of energy consumption for all three legal ELT treatment methods.

A simplified comparison of net benefits and total impacts in this much-cited comprehensive study shows that the most eco-effective ELT treatment technology is pyrolysis, followed by dynamic devulcanization and ambient grinding. 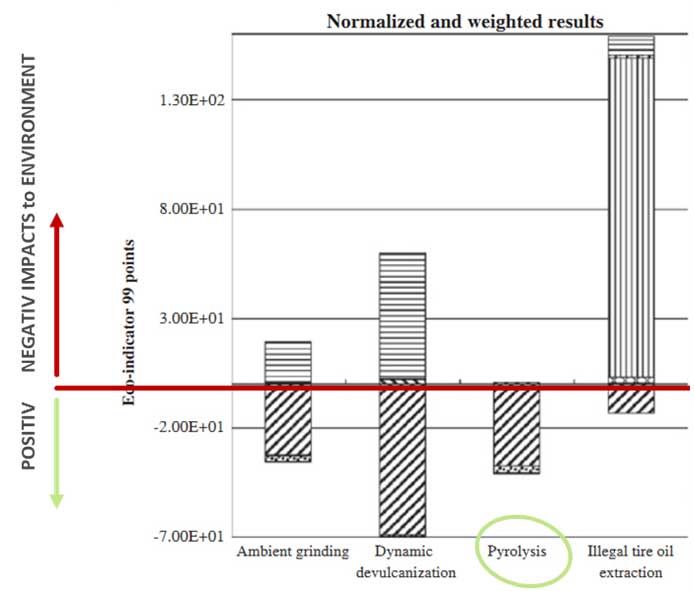 Pyrolysis as an environmentally effective solution

A more recent study by Müfide Banar (published in 2015) [ref. 2] researched the environmental impact of a waste tire pyrolysis plant in Turkey using the Life Cycle Assessment (LCA) method. As mandated by ISO 14040 guiding the methodology of an LCA, the system boundary, including feedstock pre-treatment and pyrolysis, was defined, and material/energy flows, including raw material, pyrolysis products were determined according to a pilot pyrolysis plant (batch cycle lasting 11 hours) and literature data. The LCA calculations were carried out using SimaPro 8 software.

The characterization results show that all the impact categories have negative values (which means avoided impacts to the environment), except for acidification. Negative values resulting from avoided products were due to the valuable products of pyrolysis (rCB and TDO). The acidification impact resulted mainly from SO2 emissions in combustion flue gases. In summary the results show that utilization of pyrolysis products in sufficient quantities and the application of flue gas treatment systems (note: which is already standard today) play an important role in presenting pyrolysis as an environmentally effective solution for waste tires.

The following savings are worth mentioning:

Nowadays it is undisputed that the chemical recycling of end-of-life tires (ELT) through pyrolysis make an important contribution to climate change mitigation.

Industrially produced blends of commercial Carbon Black (CB) with the environmentally friendly and sustainable recovered Carbon Black (rCB), have not only proven their technical and commercial maturity, but also contribute to a significant improvement in the ecological footprint of the Carbon Black.

Chemical recyclers that process end-of-life tires using pyrolysis are manufacturers of environmentally sustainable chemical feedstocks (rCB and TDO) for the chemical and rubber industry. State-of-the-art pyrolysis technologies do not only avoid greenhouse gas emissions compared to today’s conventional production processes, but also increases the resource efficiency while closing the loop in the transition to a circular economy.

These older studies took place at times when technology was "generations behind the state of the art in today's ELT pyrolysis technology", yet (nevertheless) produced a clearly positive result for chemical recycling of ELTs. Modern pyrolysis technologies, on the other hand, are equipped with efficient exhaust gas and /or flue cleaning facilities, use an electricity mix from renewable energy sources, recycle excess energy for the process (reduced energy consumption), and have state-of-the-art control and safety systems (etc.). This leads to an even better overall environmental profile, in which the predominantly positive effect on humanity, environment, and resources is again greatly increased compared to 2010 or 2015.

Recent LCA indicates tremendous positive environmental impact and significant savings in resources, CO2 emissions, water, and electricity use. Although these analytic results by a wide range of suppliers vary, one can safely assume that the chemical recycling of ELTs through pyrolysis eliminates between 3 and 4 tons of direct and indirect CO2 emissions compared to today’s conventional production processes.

In summary we can categorically conclude that, since operations of state-of-the-art chemical tire recycling (pyrolysis) plants are producing sustainable chemical feedstocks, they thereby support the overarching and concrete specified goals of the EU Green New Deal as well as the UN Sustainable Development Goals and significantly contribute to the GHG reductions in the manufacture of carbon black and base chemicals.