Renowned Danish manufacturer of tire recycling equipment, ELDAN Recycling A/S, has developed a new sensor-based system to detect foreign objects in tire shreds and reduce the risk of breakdowns and yearly down time of its tire shredders.

The ELDAN Foreign Object Detection (FOD) system consists of a sensor system monitoring the vibrating discharge conveyor following the ELDAN Super Chopper. Changes in acceleration from dense objects hitting the surface are picked up by the FOD system, which will stop the material flow of the plant and give off a warning signal. It is then easy for the operator to search through the material on the vibrating discharge conveyor, find and remove the foreign object, and continue production without further problems.

“We have run the system for more than 9 months at a customer’s site to test the efficiency and are very satisfied with the results so far,” Mr. Jan Kjær, head of R&D at ELDAN, said. “A breakdown is expensive both in terms of down time and spare parts, but even the most thorough cleaning of the tires cannot remove all the foreign objects that may hide inside. This system will serve as an extra safety measure to protect the following machines.” 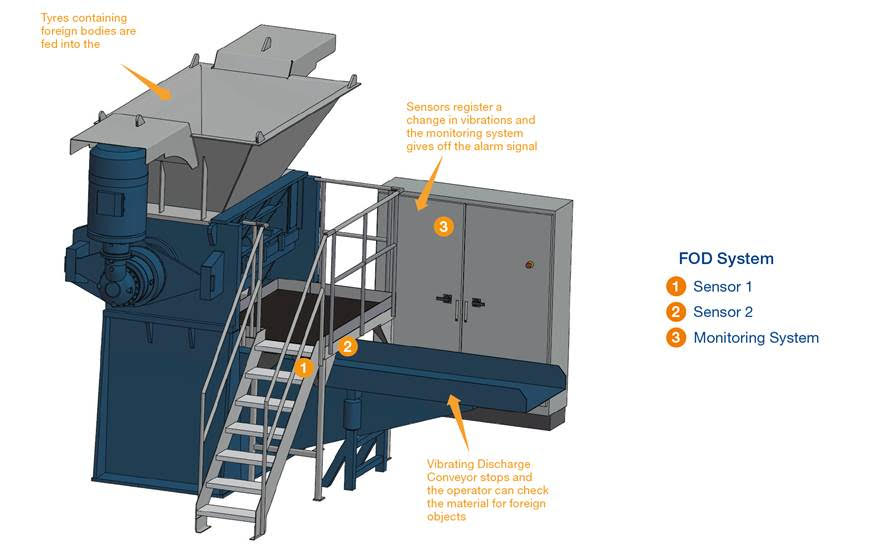 To prevent a false sense of security, the system is equipped with a back-up safety system in case one of the sensors fail. It can run with just one functioning sensor but will give off a warning signal. If both sensors fail, the plant will stop completely. The FOD system can detect both small and large metal objects and stones, and the sensors can be adjusted to meet specific customer demands. “We are currently developing the system for other types of input material too, e.g. cables,” Mr. Kjær says. “The plan is to start testing with a customer soon.”

The ELDAN FOD system is nominated in the “Best Tire Recycling Innovation” category at the Recircle Awards 2020. To learn more on how to vote for ELDAN, please read more here.

Other innovations by ELDAN Recycling

As regards to other recycling technologies of the company, ELDAN has been receiving a great feedback about its innovative clean-cut tire shredding technology.

For more information about the technology, please navigate to the website of ELDAN Recycling.

Since 1956 ELDAN Recycling A/S has been one of the leaders within the on-going technical development and production of machinery for the recycling industry and has been delivering both turnkey systems and single machines. With more than 1300 plants and 8000 single machines all over the world, ELDAN Recycling A/S is positioned as one of preferred partners for customer who want to run a profitable recycling business within sectors such as e.g. tires, cables and WEEE.

ELDAN Recycling A/S is one of the few companies within the industry with its own production facilities. This enables the information to be communicated quickly and accurately between the different departments, thereby ensuring the quality of the product and the flexibility of the production program. ELDAN Recycling A/S offers a complete package of services ranging from design and fabrication to delivery, installation and after-sales service. For more information, visit: www.ELDAN-recycling.com. The brand Redoma Recycling also forms a part of the ELDAN Group.