Authorities in Australia have warned land and property owners about illegal actions of scammers in which thousands of end-of-life tires were illegally dumped at leased properties, leaving one victim with a huge clean-up bill.

ABC News reports that the scam involves offenders approaching businesses which have stockpiles of end-of-life tires and offering to dispose of them at far cheaper rates than legitimate tire recyclers. They then dump the scrap tires at properties they have leased, such as storage lockers, vacant land lots and backyards of rented homes.

In one instance, piles of tires were left at a property in Wungong, in Perth's south-east, leaving the owner with a $100,000 clean-up bill.

Matt Warnock, senior manager of water operations at the Department of Water and Environmental Regulation, said landlords and property owners were at major risk of being left having to foot the clean-up costs. 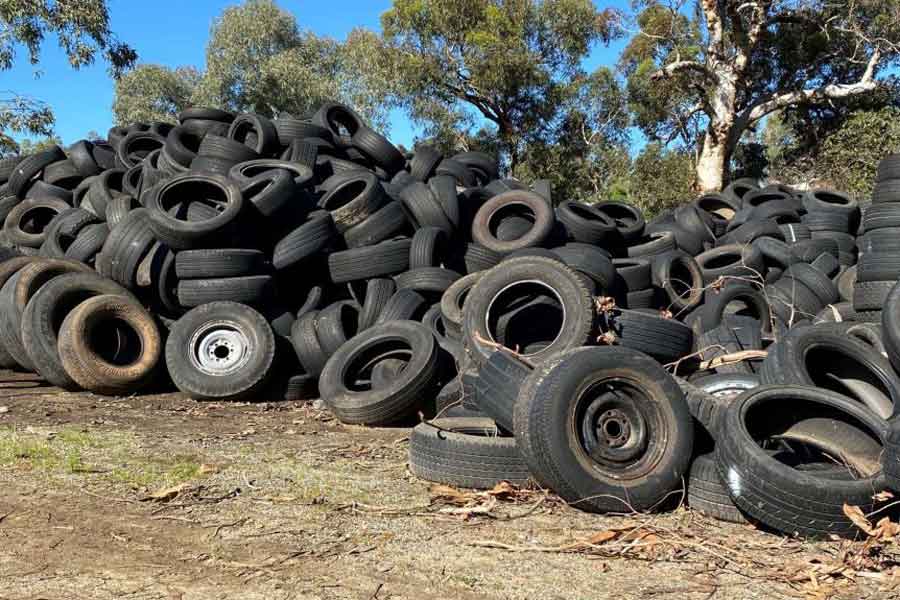 Photo by Department Of Water And Environmental Regulation of Australia (DWER).

"If a property is abandoned with waste as in this case, used tires, then it's a problem of removing and legally disposing that waste rests with that property owner," he said.

"Up until recent times, this was quite an unusual event. However, in the course of this investigation, the Department of Water and Environmental Regulation has identified at least 10 places across Perth that have been used in this way.

"In terms of scale, I believe we're talking in the order of hundreds of thousands of tires … certainly in Western Australia, this is the largest operation of this type that my investigators have come across … so far this is the most bold operation I've seen in this state."

ABC News reports that Mr. Warnock recommends businesses to ensure they are doing their due diligence.

"Businesses disposing of used tires have a legal responsibility to ensure that any contractor who transports their used tires is licensed to do so," he said.

The department also warned of serious environmental risks if the tires caught fire or were deliberately lit.

"Extinguishing tire fire is dangerous and very problematic, it's a high-risk event for any firefighter and very difficult to contain," Mr. Warnock warned.

He said tires could also collect rainwater, creating breeding grounds for mosquitoes. The unauthorized transport of a controlled waste and abandonment of waste are offences which carry a maximum penalty of $62,500 for an individual and $125,000 for corporations.

Engineers and scientists all over the world are challenged by the waste problem on horizon. An engineer who claims to have a solution is Michael Vainer, inventor and founder of Polymeric Powders Company. According to the magazine, he has been trying to develop solutions for tire waste for more than a decade and a half. New rubber devulcanization technology Michael Vainer is an engineer looking at how to solve end-of-life tire problem. While Vainer’s company website reveals few details, he is known to have conducted a lot of research and holding many patents. Vainer company Polymeric Powders’ process takes in raw materials from tire shredders, applies thermal processing followed by a cracking process, then combines the resulting powders with common plastics. The resulting composite material is provided as masterbatch pellets for injection molding or extrusion, or as filament for 3D printing.

Episode 22 of the Tyre Recycling Podcast features the team of ECO Green Equipment – Brad Swenson and Andres Salazar. The two founders sat down with Ewan Scott to discuss their company's work and role in tyre recycling in multiple areas.

According to recent media release, Rice University lab’s optimized flash process could reduce carbon emissions, which could be be where the rubber truly hits the road. Rice University scientists have optimized a process to convert waste from end-of-life rubber and tires into graphene that can, in turn, be used to strengthen concrete. The environmental benefits of adding graphene to concrete are clear, chemist James Tour says. “Concrete is the most-produced material in the world, and simply making it produces as much as 9% of the world’s carbon dioxide emissions,” Tour said. “If we can use less concrete in our roads, buildings and bridges, we can eliminate some of the emissions at the very start.”