In his press release Mr. von Wolfersdorff said he appreciated it when tier one carbon black companies spoke about rCB. The expert says top carbon black producers attend rCB workshops, presentations or conferences organized by Wolfersdorff Consulting, and there are ample opportunities for collaboration between the rCB and the CB industry, some of which have been highlighted in his Carbon Black World 2018 presentation in Düsseldorf (see image below). There is way to go, Martin von Wolfersdorff says. 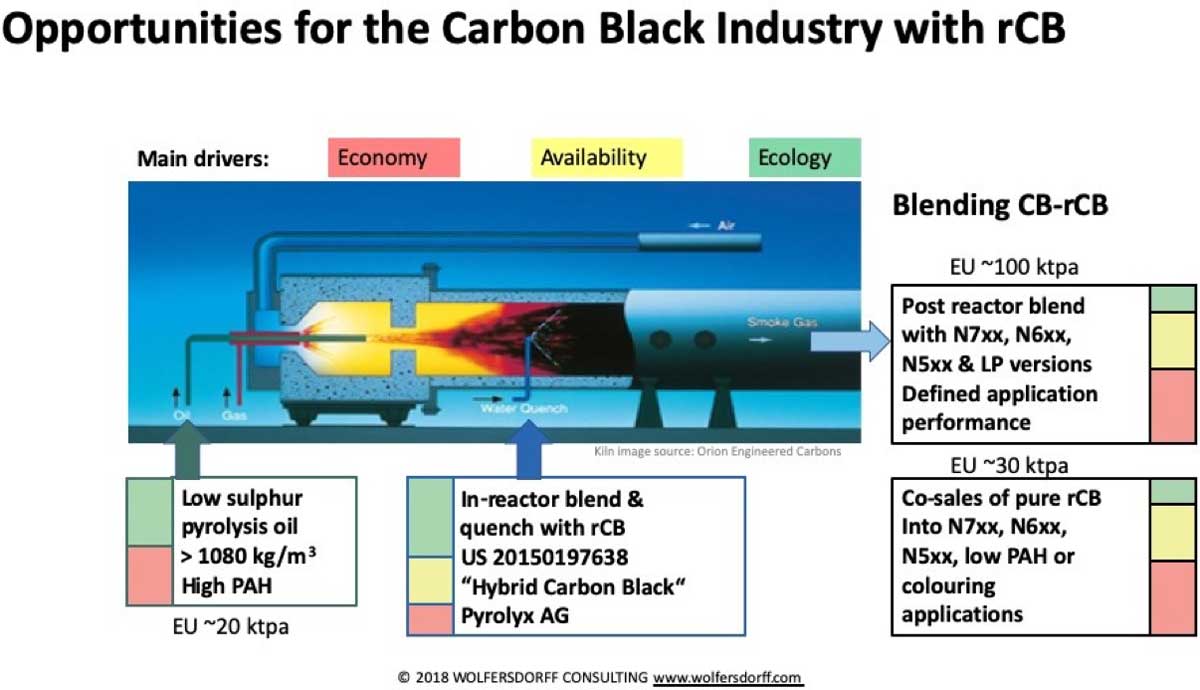 Below we quote Mr. von Wolfersdorff and his recent press release:

"I even get it when carbon black makers bash rCB for its many weaknesses. It is not carbon black, it might not be consistent and today it certainly cannot be used in PCR tread. We have not even talked yet about the rCB industry’s low production volume and low security of supply. During my time in the carbon black industry, I have said “no” to many inquiries from questionable little start-ups that claimed to produce recovered carbon black. Once I had my team test such a sample. It was smelly and performed poorly.

That was in 2013. Since then the tire pyrolysis industry has evolved. The most impressive proof for that was the 1st Recovered Carbon Black Congress in Berlin on May 21st-22nd, where 172 participants from all over the world met to discuss the current state of rCB technology and which had a keynote from Michelin and presentations from rubber industry leaders like Hexpol and Semperit. This event will now be organised annually to follow the rapid developments in the industry.

All five US carbon black makers are currently passing on EPA and IMO2020 compliance costs as price surcharges to their carbon black customers. Obviously, many US customers are looking for alternatives, but I reckon that major movements are to carbon black imports rather than to rCB. The tier one carbon black makers already lost part of this market to import players from Russia, China and Latin America.

Striving to produce reinforcing rCB, many rCB companies think they have to reduce rCB ash content, but this is only half of the story. Some rCB inactivity is due to contamination of rCB particles with inorganics and char from carbonised polymers. But the major reason for inactivity of rCB is the composition of the end-of-life tire feedstock.

While reinforcing rCB might seem like the holy grail of tire recycling for many, I recommend tire pyrolysis companies to first establish a stable operation of sufficient scale with normal and semi-reinforcing rCB. The market for this type of carbon black is big enough and companies can gain credibility by building a solid business in the semi-reinforcing market segment.

I believe that the recent drone attacks on the Aramco refinery will keep carbon oil feedstock and hence carbon black prices on a relatively high level. In this environment, rCB can be a good economical and ecological alternative, not in all, but in a sufficient number of rubber applications.

Alongside its extensive rCB consulting with more than 20 clients, Martin von Wolfersdorff will collaborate with global industry leaders in the definition of DIN SPEC rCB specifications. This will help potential rCB buyers to specify what they want to buy and it will help rCB producers to know what product quality they need to produce."