Queensland’s Norwell Motorplex – one of Australia’s leading multi-use moto venues – will be resurfaced with a groundbreaking new asphalt product which is made from recycled tyres, says an online magazine Speed Cafe.

Known as ‘Carbonphalt’, the product is the result of a partnership between Austek Asphalt Production and Pearl Global, and will first be used to replace the surface of Norwell’s 2.2km track. With 2500 tonnes of Carbonphalt required to complete the job, the project will account for 25,000 tyres which otherwise would have ended up in landfill. To make the product, end-of-life tyres will be broken down to recover carbon char, reusable steel, and fuel oil by Pearl Global, which is based near Norwell at the northern end of the Gold Coast.

The magazine says that the carbon char, which will be treated such that it is 75 percent pure carbon and takes the form of a fine powder, will be delivered to fellow Gold Coast company Austek Asphalt to create the Carbonphalt mix, while the oil will fuel both companies’ manufacturing plants. While slightly more expensive than conventional asphalt, Carbonphalt is said to offer superior durability, improved stiffness and increased scuffing resistance. 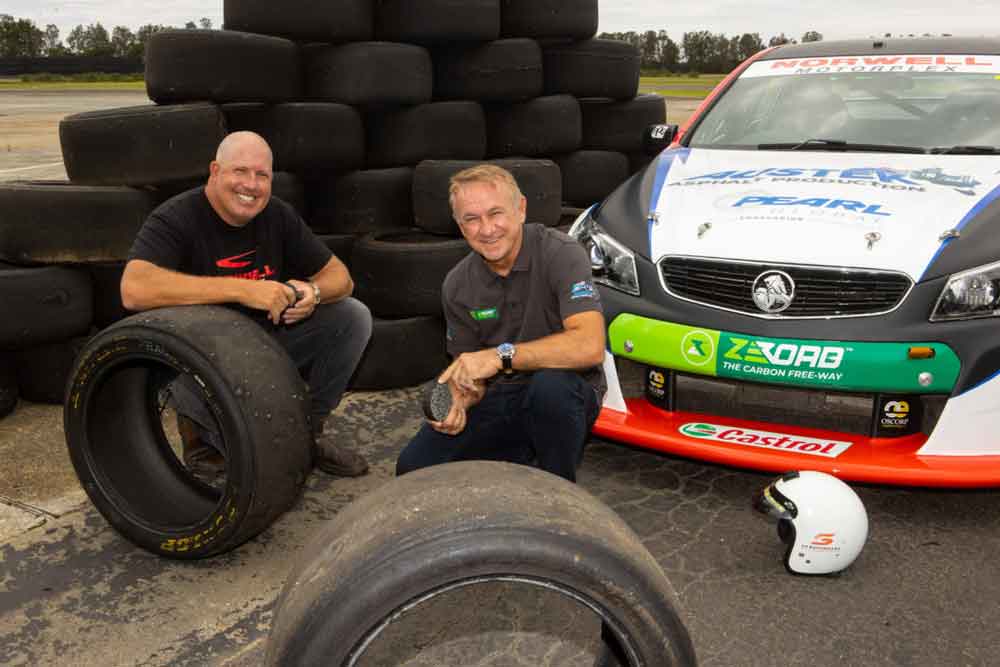 On hand for the unveiling at Norwell today was the facility’s boss, Paul Morris, as well as Mick Doohan, Russell Ingall, Pearl Global Executive Chairman Gary Foster, and Austek Asphalt Managing Director Peter Ozoux. “This new Carbonphalt is a fantastic product and we are grateful to be one of the first beneficiaries of it at the Norwell Motorplex,” said Morris.

“We have been seeing first hand for years the battle on what to do with used race tyres at the completion of their life and this new product is the answer we have been looking for.

“While government bodies worldwide should be embracing the incredible benefits of the product, I think it is a no-brainer for the motorsport industry.

“There is the opportunity to set up supply chains of used race tyres and for venues around the world to use Carbonphalt when they are building new circuits or resurfacing existing ones.

“To think we will be recycling approximately 25,000 tyres with the resurfacing of our track at Norwell is really mind blowing and something we are proud to be associated with.

“We want our Super School cars to enjoy a faster and safer surface, but we also need that surface to stand the test of time and the Austek product is designed to do both those things and cost-effectively.

“It would be great to see this product being used by councils, governments and race tracks all over the country.”

“There has always been a stigma attached to motorsport when it comes to used tyres, especially with more and more focus on the environment, but Carbonphalt basically helps eradicate that.

“I could not think of a more appropriate process than used race tyres being recycled and turned back into a track surface to be enjoyed by the next generation of racers.”

According to the magazine, Ozoux believes the product will have global appeal.

“Austek Asphalt and Pearl Global are proud Queensland companies and we have enjoyed working on the development of Carbonphalt which we believe is a game changer in our industry,” he said.

“We are proud of the fact that Paul (Morris) and his team see all the benefits attached to this product and have been enthusiastic about it being laid at the Norwell Motorplex, where safety and durability have always been a priority. Now they can add environmentally friendly to that list.

“We cannot wait to see racing of all types happening on this new surface.

“The journey has been a long one to this point, but we are now excited to lay the first patch of Carbonphalt at Norwell and let the rest of the world know what we have to offer.

“We are proud to be working with Pearl Global on a solution to one of the world’s great problems which is the disposal of used tyres.

“At the same time, we are producing a better product which has become vital to every society with transport infrastructure.”

More than 1.6 million tyres per year are set to be recycled at Austek, which will also substitute between 1.3 million and 1.6 million litres of fossil fuel (diesel) with the tyre-derived fuel oil from Pearl Global’s recovery process.

Carbonphalt production will save 7000 tonnes of carbon dioxide equivalent emissions per annum, equivalent to the output of 3100 cars.

A second asphalt product called ‘Carbonmastic’ is also created from the process, and can be applied in thinner layers such that it can be used to patch up cracked surfaces.