Pyrum Innovations AG (Pyrum), a pioneer in the sustainable recycling of end-of-life tyres (ELT) based on its patented pyrolysis technology, has for the first time obtained a determination of the CO2 savings of its pyrolysis process as part of a "Life Cycle Assessment" (LCA, eco balance) by the Fraunhofer Institute for Environmental, Safety and Energy Technology. The results once again demonstrate the unique and sustainable efficiency of the Pyrum technology. Compared to the use of fossil raw materials, Pyrum’s process saves 747 kg CO2 equivalent per tonne of ELT; if the use of the waste heat produced is included, as Pyrum is already applying, even 965 kg CO2 equivalent are saved per tonne of ELT.

By comparison, the current recycling mix in Germany achieves savings of 561 kg CO2 eq. per tonne of used tyres. In comparison, Pyrum performs up to 72% better.

Pascal Klein, CEO of Pyrum Innovations AG: "The enormous CO2 savings of our method surprised even us to this extent. The results of the Life Cycle Assessment show us once again that our pyrolysis technology is the leading method for recycling end-of-life tyres. While other methods are severely limited in market potential, we are only at the beginning with pyrolysis and see major growth opportunities in this area."

The current recycling mix for ELT in Germany is made up of material recycling (market share 52%) and the incineration of used tyres in cement plants (42%) and refuse derived fuel (RDF) power plants (6%). 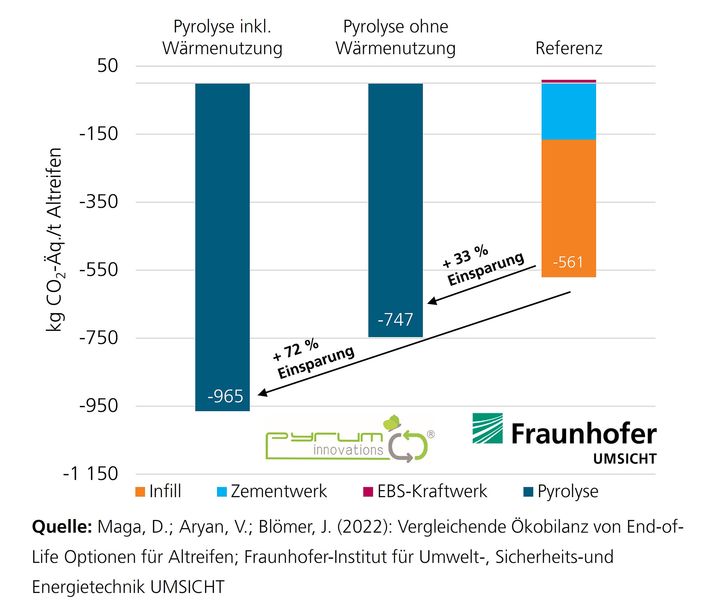 The infill method, the recycling of used tyres for the production of, for example, playground flooring or sports fields from rubber granulate, also achieves large CO2 savings of 778 kg CO2 eq. per tonne of ELT. However, the Pyrum’s pyrolysis process including the use of waste heat exceeds the savings by 187 kg CO2 -eq. per ton of used tyres. In addition, the results of the Fraunhofer Institute confirm that the market potential of the infill method is clearly limited - at the moment it comes to a maximum market share of 52%, which can hardly be expanded any further. In addition, pyrolysis can also keep the materials in the loop over several life cycles.

Pyrum Innovations AG is active in the attractive recycling market for end-of-life-tyres with its patented pyrolysis technology. Pyrum's pyrolysis process is energy self-sufficient, saves a large portion of the CO2 emissions normally generated during the disposal of end-of-life-tyres in a cement plant and produces new raw materials such as pyrolysis oil, gas and recovered carbon black from the waste used as input materials. In this way, Pyrum closes the recyclable material loop and pursues a completely sustainable business model. As a pioneer, Pyrum Innovations AG was the first company in the end-of-life-tyre recycling sector to receive REACH registration from the European Chemicals Agency (ECHA) for the pyrolysis oil it produces. This means that the oil is recognised as an official raw material that can be used in production processes.

In addition, Pyrum has received ISCC PLUS certification for the pyrolysis oil and the recovered carbon black. Both products are thus considered sustainable and renewable raw materials. These achievements have also been recognised by international experts in the tyre industry. For example, Pyrum won the Best Tyre Recycling Innovation category at the inaugural Recircle Awards and has been nominated for the "Grand Prix Mittelstand" ("Großer Preis des Mittelstandes") from the German state of Saarland.