Tire dumps are always an environmental issue, and until they are addressed, they will remain a problem. Whilst attention was focused on Kuwait, it is a reality that other states also have large tire dumps.

Qatar was until recently the home to a large tire dump at its Umm Al Afai landfill. However, it has recently cleared the site and returned it to its natural state.

This achievement, according to Eng Hamad Jassim Al Bahr, Director of the Recycling and Waste Management Department, falls within the Ministry of Municipality's framework of finding successful solutions in the recycling and safe disposal of waste in all of its sites, including the Umm Al Afai landfill. He claimed that the dump has accumulated millions of used tires over several years. 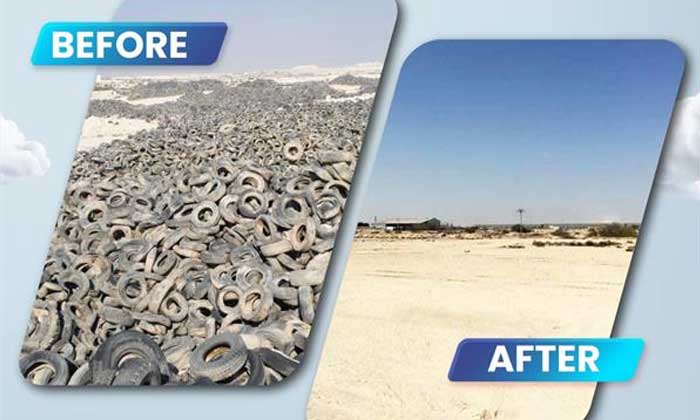 Before and after the dump cleanup. | Photo by MENA FN.

The Umm Al Afai landfill, which covers a total area of around 3.5 million square meters, was closed to receiving any sort of rubbish when tires collected on the site, according to Al Bahr.

According to him, the department encouraged businesses and investors to dispose of tires in landfills by presenting a technical proposal to dispose of all end-of-life tires with private sector participation. According to Al Bahr, the tenders were awarded to three tire recycling firms, with contracts signed with the management to dispose of the total quantity.

Companies were given QR250 for each ton disposed of while they worked.