Recircle Awards 2023 to be launched in March

Plans for the 2023 Recircle Awards have been revealed by Valebridge Media Services (VMS), a global media services agency with offices in Crewe, the United Kingdom; Madrid, Spain; and Kuala Lumpur, Malaysia. The third annual Recircle Awards will recognize sustainable innovation, production methods, management, and services within the tire retreading and recycling industries.

A total of 22 awards, representing a broad and balanced variety of categories from the whole tire business, will be presented at the Recircle Awards in 2023. Two of the category winners for 2023 will be revealed and awarded their prizes at a significant premiere ceremony that will take place on Wednesday, March 8 during the Tyrexpo Asia exhibition in Singapore.

In the meantime, it has been confirmed that Autopromotec will continue to act as the Recircle Awards' title sponsors and will serve as the host of the Awards Ceremony at Futurmotive - Expo & Talks, the new event focused on the automotive industry's transition to new energy and environmental business models, which will take place from November 16–18, 2023, in Bologna, Italy. 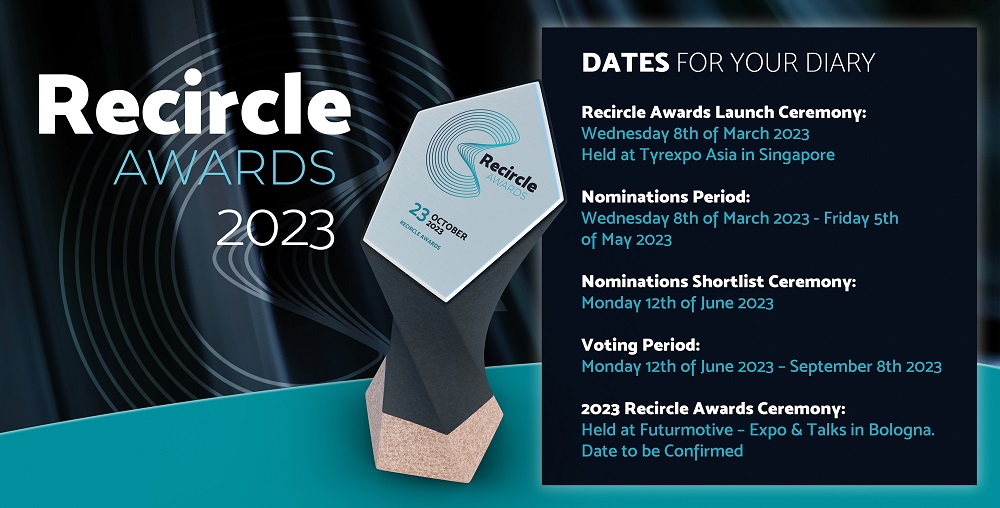 Nominations for the Recircle Awards will open on Wednesday 8 March 2023 and close on Friday May 5, 2023.

The shortlist will once again be chosen by a specially constituted Nominations Committee of 15 individuals from the global tire retreading and recycling industries who were chosen based on their independence and their acknowledged expertise in their respective fields. The shortlist will be announced in a virtual Nominations Ceremony on Monday, June 12, 2023.

To find our more, proceed to Recircle Awards website.