Sustainable rCB, thermochemically recovered from end-of-life tires, has already made the leap into industrial practice, and is making an important contribution to closing the loop in the tire and rubber industry. The first Cradle to Cradle certificate for rCB was already issued by EPEA in 2017, and most recently another rCB was accredited under the International Sustainability & Carbon Certification (ISCC) scheme. Besides the environmental advantages of using rCB in the rubber & tire industry, for instance that of CO2 reduction, the economic feasibility of pyrolysis is positively affected by these markets.

It has been shown that properly produced and processed rCB can be used as a sustainable substitute for CB N550 / N660 to the extent of approx. 20% without much influence for SBR compounds (e.g.) in terms of tensile strength and tear strength.

In general, as with all products, the essential prerequisites are good and consistent product quality, constant production quantities from several thousand tons per year (the more the better), as well as an appropriate business strategy.

Recovered Carbon Black (rCB) is a new category of Carbon Black, as it is a heterogeneous nanomaterial comprised of a mixture of more than one grade of virgin CB with varying ash content, particle size, morphology, surface chemistry and activity.

The presence of a variety of organic and inorganic additives also underscores the complexity of the pyrolysis process by producing new substances that didn’t exist in the waste rubber feedstock (e.g., carbonaceous deposits).

Based on the work of Martinez and Yu, we give a brief overview of the approaches for increasing the performance by modifying the rCB where indicated.

To some extent, modification methods determine the surface chemistry of rCB, which is vital in various industrial applications. We differentiate between two approaches for improving rCB properties: a) in situ modification occurring in the process of rCB production, and b) post-pyrolysis modifications induced on the surface of CB [YU et al., 2019] 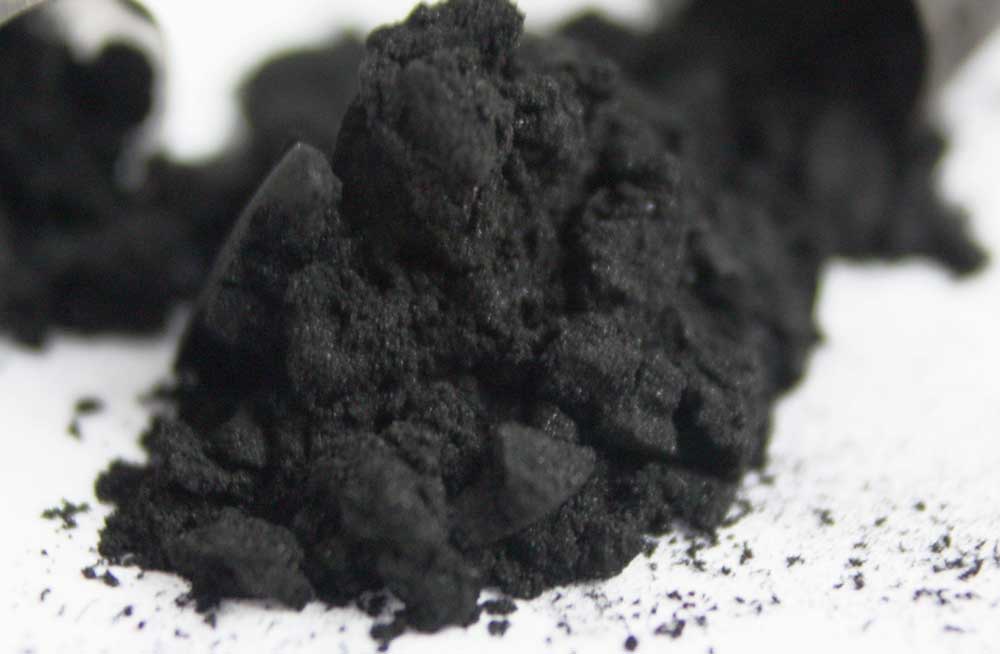 According to YU and colleagues the post-pyrolysis modification methods for rCB can be divided into 2 steps: purification and surface modification (the latter is very special and will be described in one of the following articles).

Carbonaceous deposits, resulting from secondary reaction during the pyrolysis process, are probably the most unwanted characteristics as they cover the surface (char layers), lead to much rougher particle sizes and limit the performance of rCB to a certain degree. [YU et al., 2019]

These carbonaceous deposits are likely located in the void space between the primary particles of the rCB aggregate, blocking a portion of their surface. [MARTINEZ et al.,2019]

It has been shown that obtaining rCB by pyrolysis under vacuum prevents the deposition of carbonaceous materials effectively due to the lower pressure [YU et al., 2019] and furthermore, the quality of rCB obtained by vacuum pyrolysis at a temperature of ~500°C and an operating pressure of 0.3 kPa is close to semi-reinforcing grades commercial CB [ROY et al., 1995].

Another method for increasing the surface area being discussed is to increase the pyrolysis process temperature from 500°C to 600°C – 700°C. These higher pyrolysis temperatures and decompression conditions have been considered to increase the surface area effectively. This is (inter alia) attributed to the acceleration of the volatilization and diffusion of unstable compounds, thereby reducing the number of hydrocarbons residues on the surface and pores. However, it has been shown that high temperature coupled with long residence time can have a negative impact on the mechanical strength of rCB [ROY et al., 1995]. Thus, other methods should be considered to circumvent this shortcoming.

If carbonaceous deposits cannot be prevented in a given process design, they will likely block a portion of the rCB surface.

Surface area is a very important property for rCB utilization in rubber manufacturing since it is one of the parameters that determine the degree of interaction of the rubber within the rCB. Therefore, a post-pyrolysis modification to increase the surface area suggests a method that increases the concentration of active sites on the edges of graphite-like regions and could provide higher interaction between the rCB filler and the rubber matrix. [MARTINEZ et al.,2019]

One such method used for treating the rCB for this purpose is post-pyrolysis of the raw rCB (extra-heating at higher temperature), either using the same reactor (“multi-stage or multi-pass”) or a second reactor dedicated only to reduce the carbonaceous deposits on the rCB.

This purification path also plays an irreplaceable role in removing trace oil and odour from raw rCB with the (adverse but manageable) effect that the agglomerated particles produced by volatile matter through post-pyrolysis are more difficult to break. [YU et al., 2019]

It should be noted that steam activation of rCB to obtain mesoporous activated carbon with a specific surface area of >700 m²/g is not discussed here, because this specialty rCB would be unsuitable for rubber composites.

The most significant difference between rCB and commercial CB lies in its ash and sulfur content, because the inorganic components cannot be removed through pyrolysis. The ash content (mainly ZnS and SiO2) has been long considered as a major barrier for the rCB incorporation in the tire rubber market. Meantime, practical experience and extensive tests have shown that the presence of this components is not a fundamental obstacle to the use of the rCB in tire rubber. Nevertheless, the use of rCB in other fields of application can make demineralization necessary.

An acid-base demineralization method to remove the ash from rCB has already been documented in 1996.

Recently Martinez described a chemical demineralization procedure with the aim of recovering the CB trapped in the rCB. The demineralization process was conducted by using cheap and common reagents (HCl and NaOH). In this sense, the acid treatment removed most of the mineral matter contained in the rCB and concentration was the main parameter controlling the demineralization process. By this method an ash content of 4.9 wt.% was obtained and the demineralized rCB (“dCBp”) showed a carbon content of 92.9 wt.%, while analysis indicated that SiO2 is the major component in the remaining ash. The removal ratio of ash and sulfur under the optimum conditions were 79.33 wt% for minerals and 70.37 wt% for SiO2. Also, the BET surface area was 76.3 m2/g. Although the obtained rCB showed a low structure, the surface chemistry was rich in surface acidic groups. Tests in Styrene Butadiene Rubber (SBR) compounding revealed its technical feasibility as substitute of commercial CB N550. [MARTINEZ et al.,2019]

Besides, the acid-base method can also be used to re-expose the active sites on rCB surface because of the dissolution of impurities. It can be considered as an essential way of upgrading CBp to produce high-valued active carbon. [YU et al., 2019]

Noteworthy is that recent research has shown that good results can be achieved by using microwave. Compared with the average removal rate of 50%-60% in ash and sulfur content, the use of HCl and HF dual-reagent in microwave reactors reached a removal rate of sulfur by 70.16% and ash by 98.33%. In addition, the specific surface area after this treatment reached 92.10 m2/g, which qualifies it as a replacement for commercial CB N326. [BANAR et al., 2015]

Presumably because of the high costs, acid-base and microwave demineralization methods have not (yet) established themselves on a commercial scale. One may have to orient oneself more on the standardized cleaning methods (de-ashing and desulfurization) for coal. The throughput rates of equipment used for these cleaning methods, however, are incomparably higher than those in the ELT pyrolysis industry, making the implementation of an economically viable demineralization concept more difficult.

It should be emphasized that demineralization is not necessary for applications in tire rubber according to the current state of knowledge.

Recovered Carbon Black is a carbonaceous nanomaterial, it is a new category of Carbon Black, containing various commercial Carbon Black grades (between 80 and 90 wt.%) and inorganic substances (between 10 and 20 wt.%), often referred to as “ash”, used in tire manufacture. In addition, it can also contain extra carbonaceous residues onto the CB surface because of repolymerization reactions, mainly depending on the pyrolysis conditions.

These unwanted carbonaceous residues might largely be avoided in-situ by choosing the right pyrolysis design and conditions (e.g., fixed-bed reactor and / or vacuum) or might be reduced by a post-pyrolysis / post-heating process.

The ash content (mainly ZnS and SiO2) has been long considered as a major barrier for the rCB incorporation in the tire rubber market. Extensive tests have shown, however, that the presence of this ash is not a fundamental obstacle to the use of the rCB in tire rubber. The proposed demineralization methods are also not yet mature in an industrial scale for ELT pyrolysis products and therefore economically not viable.

Nevertheless, the intended use of rCB in other fields of application can make purification (demineralization) necessary.